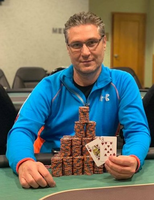 Marcello Mancarella, age 56, died Sunday, January 9, 2022 at St. Joseph's Wayne Hospital, Wayne. Mr. Mancarella was born in Solarino,Italy, the youngest of 12 children of the late Antonio and the late Vincenzina (Rubera) Mancarella. He lived in Wayne and was formerly of Daytona, FL. Marcello was a proud US Navy veteran. He was an avid poker player who was employed by the Hard Rock Casino in Hollywood FL as a poker dealer where he worked in many professional poker tournaments. He was known as free spirit who loved to travel and would pack up his car on a moment's notice to begin an adventure to somewhere new. Marcello loved to cook and had worked earlier in his life at Big Jim's Pizzeria formerly in Haledon. He was also a diehard fan of his favorite sports team the New York Mets. He is survived by his two daughters: Stephanie Cunningham and Isabella Mancarella; his girlfriend, Danglis Tompkins; brothers, Ottavio, Giuseppe and Antonino Mancarella; brothers, Salvatore, Sebastiano, Paolo and Carmelo Rubera; sisters, Paola Wood and Giuseppina Rubera; 2 grandchildren and a host of in-laws, cousins, nieces and nephews and other family and friends. In addition to his parents he was predeceased by his brothers Giuseppe Rubera and Orazio Mancarella. Visiting hours will be Friday, January 14, 2022 from 4-8 PM and Saturday, January 15, 2022 from 11:00 AM -12:00PM. Fr. Michael Lombardo will officiate a prayer service at 12 PM at the funeral home. The committal service with military honors will follow on Saturday at 1 pm at Cedar Lawn Cemetery Chapel in Paterson. Memorial donations may be made to the Wounded Warrior Project, PO Box 758517, Topeka, KS 66675, www.woundedwarriorproject.org