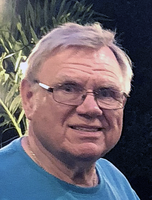 Michael P. Winschuh, age 77 of Wayne passed peacefully at Chilton Medical Center on Tuesday, January 26, 2021. Michael was born and raised in Paterson, NJ and graduated from East Side High School in 1961. While in school Michael enjoyed playing basketball and later loved driving around in his 1955 red convertible Corvette. Michael looked forward to attending weekend dances at St. Leo's Church, where he met his future wife and love of his life, Charlene. Michael and Charlene moved to Wayne in 1968 where they raised their 2 children, Michael Jr. and Debbie. His family was his pride and joy and Michael loved nothing more than spending his free time with them barbecuing, cooling off in the pool, doing puzzles or watching the Mets. Many times, you would catch Michael and Charlene dancing in the living room to a favorite song. Michael also enjoyed traveling along the east coast in his Winnebago, making memories that his family will cherish forever. Michael was an amazing grandfather to Michael, Samantha, Danielle, Jessica, and Kate and they were his greatest joy. Once the grandchildren were born, the family had the pleasure of going on vacation together in Cape May every summer where Michael and Charlene would play with their grandchildren at the beach. He even rocked a glitter skull tattoo one summer just to make everyone laugh. His favorite color may not have been purple but almost every time the family was together, he would wear it because he knew it was his granddaughter's favorite color. He enjoyed making the classic Grandpa joke when any of his grandchildren wore ripped jeans, always offering money to buy another pair without holes. As the kids got a little bit older, his true talent for peeling shrimp was discovered in Cape May and the name "Michael Peter Peeler" was born. With age grew his love for nachos, cookies and most sweets, like German chocolate cake, often sneaking a few by Charlene, even in the last few weeks. He also had a passion for making ribs, mostly because his granddaughter would request them every year for her birthday. Michael was truly proud of each and every grandchild with any accomplishment and future endeavor. He could be found at almost every one of Sam's, Dani's and Jessie's field hockey games, no matter how cold or rainy. He enjoyed going to Kate's recitals, the grandkids' award ceremonies, and helping out with any project he could. He even helped his grandson, Michael, place in the Pine Wood Derby. Known as Grandpa and Pop-Pop, Michael was most proud of how well all of his grandchildren were doing in school. He was often seen wearing Stevens or Gettysburg attire, where his grandchildren attended college, which made him beam with pride. Michael was never boastful about anything, except his family. He was known for always carrying his Swiss army knife, willing to fix anything and everything, no matter how long it took. Michael was also a "secret" action-movie enthusiast, often watching them with his son-in-law, Bob. Always willing to help out, Michael made sure that when his daughter, Debbie, had one of her many parties he would pick up his daughter-in-law Donna along with the kids to get them there on time so the grandchildren could be together as much as possible, as his son, Michael Jr., was usually running late from work. Michael was a parishioner of Annunciation of the Blessed Virgin Mary RC Church and a proud member of the Knights of Columbus. He worked for 50 years as a butcher and meat manager in Pathmark where he was known for always being a true gentleman and was respected for his incredible work ethic. After a short retirement, Michael went to work at Wayne Meats as a part time butcher to make extra money so he could spoil his grandkids even more. Michael is survived by his beloved wife of 57 years, Charlene (Puzio) and devoted children, son Michael Jr. and wife Donna of Pompton Lakes, and daughter Debbie and husband Robert Hessels of Morristown. Cherished grandfather to Michael, Samantha, Danielle, Jessica and Kate. Also survived by brother-in-law, Charles Puzio, nieces and nephews, Mark, Susan, Paul, Peter and Kristi and dear friends. He is predeceased by his parents, Herman J. and Myrtle (Willimann) Winschuh and brother Paul. Visiting hours will be on Sunday, Jan. 31 from 3-7 PM. Funeral mass will be offered Wednesday, February 3, 2021 at 9:30 am at Annunciation of the Blessed Virgin Mary RC Church. To view a live stream of the funeral mass please go to: https://livestream.com/aritonvideolive/winschuh Burial at Christ the King Cemetery, Franklin Lakes. In lieu of flowers, donations can be made to St. Jude Children's Hospital.